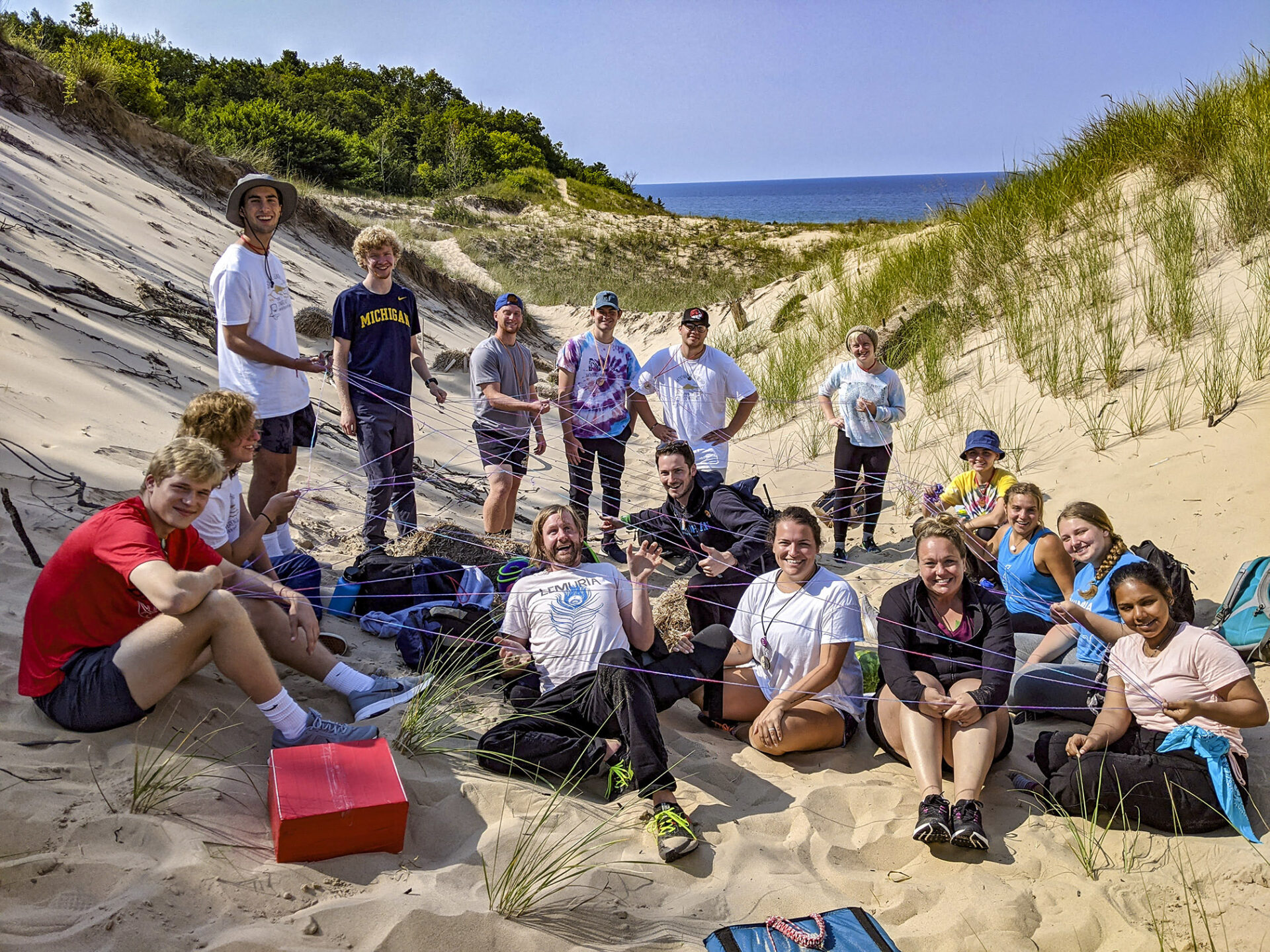 National Leadership Conference participants were finally able to gather on the dunes of Miniwanca once again in 2021, albeit in a new, more intimate way.

While the COVID-19 pandemic prevented the traditional eight-day annual conference, the American Youth Foundation hosted two four-day mini-conferences, bringing both challenges and unexpected benefits. The first mini-conference from July 22 to 25, 2021 welcomed 32 participants from the Connected in Compassion and yunážiŋkhiyA classes, and the second took place July 29 to Aug. 1, 2021 with 12 members of the Bold Hearts, Rising Voice class.

2021 central staff member and current NLC Co-Director Erin O’Brien has been a part of NLC since summer 2000 — she graduated as a participant and has volunteered ever since. She loves being witness to those “a-ha” moments where people connect with an idea or learn something about themselves. This year’s conference, she said, provided plenty of those same moments, despite being shorter and smaller than a typical year.

“I think people really needed the familiarity and knowing that that positive community is still there, and that even with all these crazy things going on in the world, we are still a place where you can have safe, open conversations about things that might be difficult to talk about,” she said.

Claire Swayze is a member of the Bold Hearts, Rising Voice class and attended the mini-conference. She felt the conversations were deeper, and it was easier to be more open and authentic in the smaller group.

“The one thing that I really noticed is by splitting up the conferences, we really got to deep dive into some of the things that have been going on in the world, and I got to form some really close connections with those from my class that did attend,” Swayze said.

Like Swayze, Landon Schumacker, a member of the yunážiŋkhiyA class, said the smaller group afforded some intimacy not usually found at the larger conference. One of his 2021 standout NLC moments was the Opening Fire, usually a loud and raucous event with hundreds of people. This year, he said the energy was totally different, but no less inspiring.

“That was one of the first times during the conference — and I would have this moment several times over — where I was like, ‘This is the same, this is great,’” Schumacker said. “It didn’t feel abbreviated or super altered. It felt like conference in a really fantastic and really impactful way.”

Class mentor Amy Hughes said 2020 was tough, especially for the participants slated to graduate, because the virtual NLC-Z in 2020 was so different and challenging. This year, she and other organizers worked hard to turn the traditional eight-day experience into four days with purpose and meaning.

“We very intentionally went through the curriculum — you can imagine it’s very hard to go through a seven-day curriculum and try to put it basically within 48 hours — and it took a tremendous amount of time and lots of Zoom sessions back and forth with my co-mentors,” she said.

O’Brien echoed that, saying finding a balance of feeling prepared and not feeling overwhelmed was the most challenging element of the mini-conferences . They wanted to be sure the participants got something meaningful out of the conference but didn’t feel stretched thin. Both staff members said they hope to continue to be able to pivot the curriculum once the conference goes back to its full eight days in 2022.

Intentionality is also something else O’Brien emphasized, noting participants gathered frequently to ask important questions and made sure there was time and space for everyone to feel like they had a voice. This, she noted, is not always the case in the larger group setting.

Hughes said the modifications also changed the way in which organizers measured the success of the event — moving away from a numerical-based assessment of retention to direct feedback from participants.

“The kids in the class were so wonderful to each other, and so I think that was one of the other surrogate markers for us,” she said.

Both Schumacker and Swayze encourage anyone thinking to join NLC to do so. Schumacker said he would be “unrecognizable” without his conference experience. Swayze said the community and mission of the conference touches her heart every year and she takes pride in being a part of NLC’s legacy.

O’Brien encapsulated why the conference resonates with so many, in 2021 and historically.

The AYF is thrilled to announce that National Leadership Conference will return to its original eight-day format in 2022. This year’s NLC will be June 11 to 18; registration is now open.