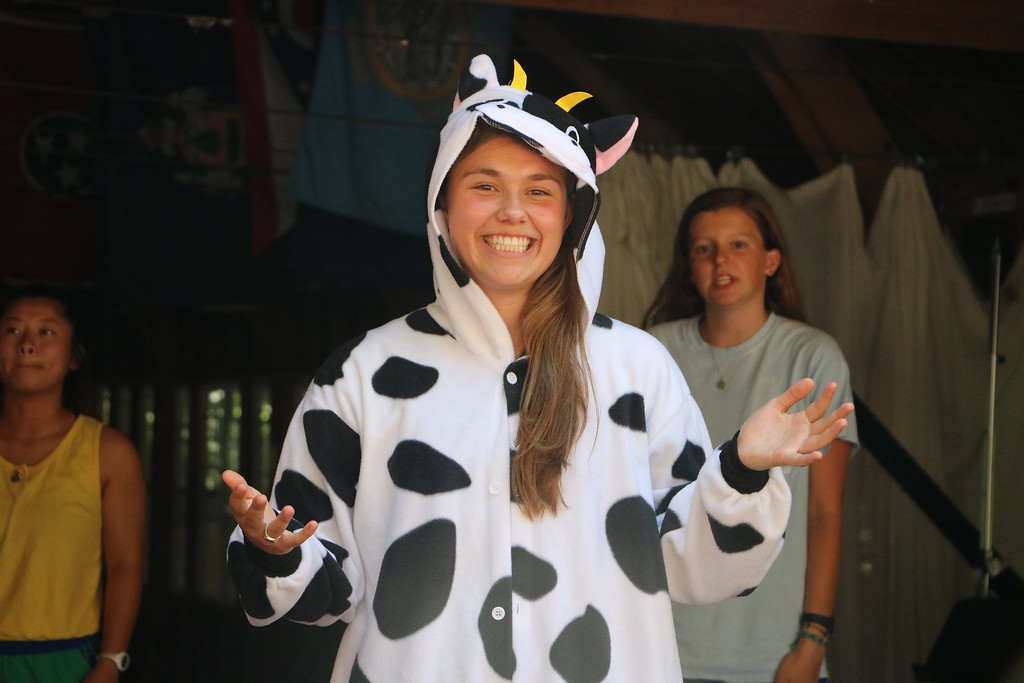 We have been on a string of beautiful Miniwanca days here lately! Though the morning dawned a little gray and wet, all the rain had passed in time for the 7:45 Polar Bear call. Our dedicated Polar Bears hopped right out of bed to start their day with a quick dip in the lake.

Our theme today is involvement, and cabin 16 shared the ways that they stay involved. The morning went smoothly with CORE and IGs 1 & 2, and before we knew it, it was time for lunch! We had a camper favorite today: quesadillas and chicken tortilla soup. During the announcements, campers received a cryptic clue to find the paddle, which was the quote, “It is a mark of leadership to adjust.” This joins other recent clues, that it is “near sand”, to “seek the green”, and “where does the Wells Fargo Wagon go?” Campers searched high and low for the paddle at every free time they had, and finally during Night’s Doings, the Dune Tribe found it right by the DDLC, or Donald Danforth Leadership Center, a building where campers receive their mail. The clue will be hidden again shortly, and campers will start receiving new clues at breakfast.

Night’s Doings tonight was the ever popular Gold Rush & Wild West Showdown! Campers sought gold, won tribal points, fought off nasty bandits, and competed to see who had the best hog call. This wild and crazy night has campers running around in search of hidden gold as they try to avoid leaders dressed as bandits. When they turn in their gold at the Bank, they receive points for their tribe. After two rounds of gold seeking, campers gathered with their tribe for the Wild West Showdown, where they competed in minute-to-win-it style challenges. Some campers had to create a pyramid as fast as they could, others ate a cracker and then had to whistle twinkle twinkle little star. My personal favorite is the hog-call, where campers will show off their loudest hog call to the judges, yelling, ‘Souuueeeeeeeeee”. It’s always worth a good laugh.

We ended our night with a Vespers led by cabin 14, and watched as the sun set. Tonight, while the sun disappeared into the mist of the lake quickly, the clouds captured and reflected the sun in a unique way. Instead of reflecting the path of the sun onto the water, we saw the path of the sun reflected into the clouds. It was a beautiful and strange experience that had campers turning their heads upside down to image the sky was the water.