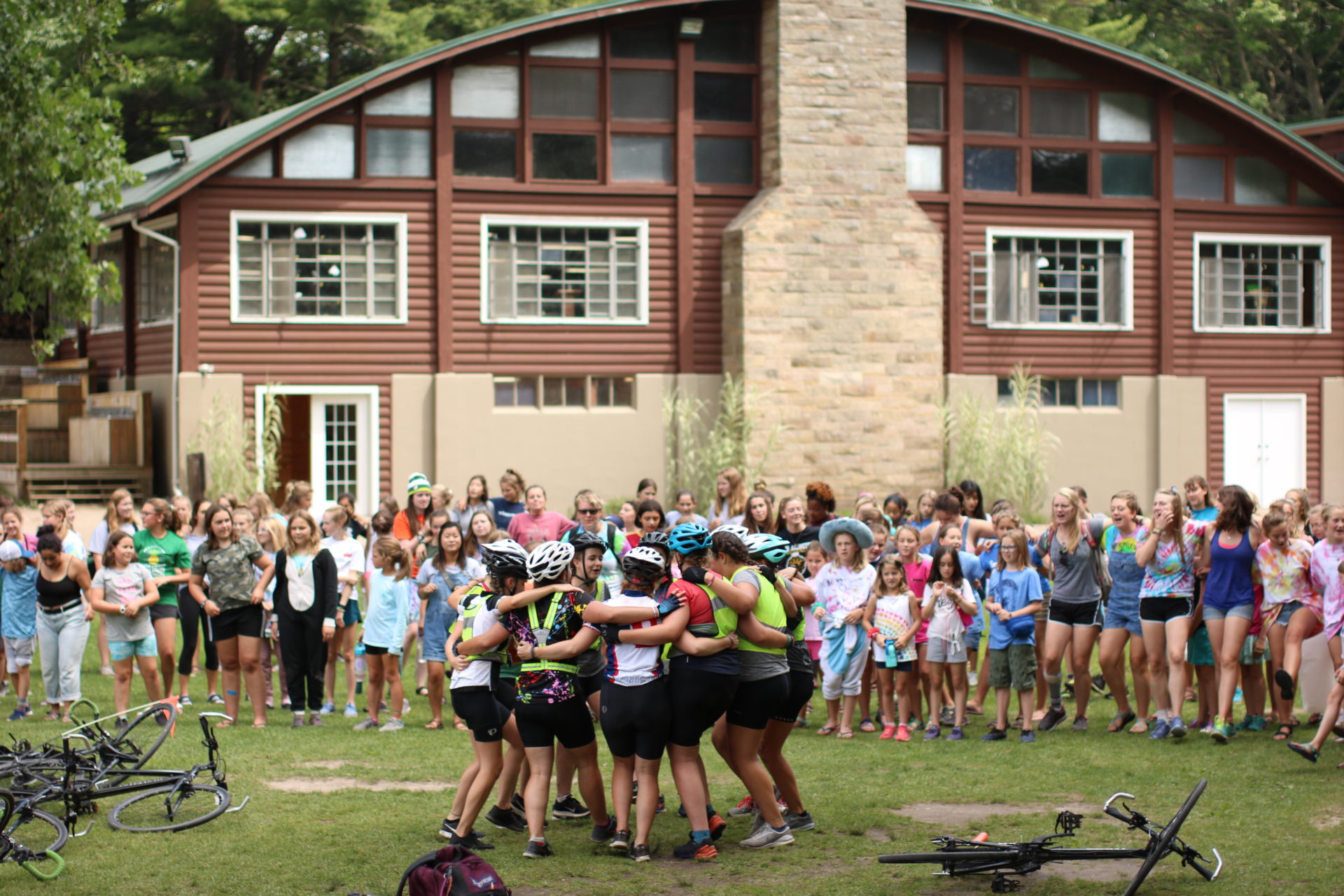 In the spirit of One Miniwanca here’s a coed blog post for Four Trails. Woohoo!

It’s the final week of camp and the Four Trails groups are all converging on Miniwanca. We can feel their excitement growing, even from here.

Most of our Trailblazers have been back in camp for several days now, where they’ve been enjoying the comforts of cabin-living and access to the BIFFs (Bathroom in the Friendly Forest). Yesterday, some of our Trailblazers came to help create a new garden at Graceland. In honor of their hard work, we’re naming it Trailblazer Garden and today they are planning on returning to put on the finishing touches. Some of the other activities Trailblazers have participated in: tribal cup, safari, leader hunt, a talent show, and Wanca Chariot.  Tonight, Trailblazers (and the rest of camp) are buzzing with excitement  as we prepare to welcome our Odyssey and Voyageur campers back.

Explorers from Boys Camp are returning today from their canoeing excursion down the Manistee River. They’ve had beautiful, sunny days out on the water, and through several fast-moving sections of the river they’ve had the chance to practice their paddling skills. Before they left, we had some incredible discussions about how to create inclusive and supportive communities, and they’ve spent much of their trip learning how to work well as a team. Explorers from Girls Camp have all returned from their biking adventures around the coast of West Michigan. They were able to gain so much knowledge about proper cycling procedures and the rules of the road, but along the way they were able to grow closer as a community. Today when they welcomed the Adventurer campers back into camp, there were tears of excitement and an overwhelming sense of support for their older Four Trails friends. There was also an air of incredible accomplishment from our Adventurer campers as they rode into the Hollow to be greeted by all of camp. Once they placed all of their bikes on the ground, they led us in singing “Founder Hearts” before we all moved toward the dining hall for lunch.

Adventurers from East Camp also made their triumphant return to camp today after two weeks cycling all around West Michigan. They’re excited to share their tales of Polar Bear plunges in Lake Michigan and climbing the dunes of Sleeping Bear Dunes National Lakeshore. We welcomed them back at dinner tonight with a sprint across Bryant Field and a run into the dining hall to the cheers of the rest of camp. Tomorrow they’ll join the rest of camp in welcoming back Odyssey and Voyageur.

The Voyageur campers are resting comfortable at the Well Site, preparing themselves for their paddle into camp tomorrow. In celebrating their return to camp tonight, they had pizza for dinner and are spending the evening doing a powerful Evening Reflection where they are remembering some of the best and most meaningful moments of their trip.

Odyssey campers are spending the night, camping at Cassidy’s house—Cassidy is our registrar and she lives on a beautiful farm not far from camp. We visited them this evening for a cookout dinner and to begin helping them prepare for ride-in tomorrow morning. They’re incredibly excited to be  greeted by all of camp tomorrow, and we can’t wait to stand on the shores of Lake Michigan when they join the Voyageur campers and sing “Founder Hearts.”

It’s been an incredible summer for the Four Trails, and knowing that everyone will be in cabins and on site tomorrow night is a powerful feeling. So much learning has happened this summer—in  all of the Four Folds, and the Four Trails team is incredibly proud of the accomplishments of these incredible young people. Be on the lookout for a blog post later this month that will provide some more information and details on just how much the Four Trails campers accomplished this summer!