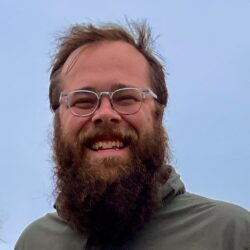 Michael began his time with AYF in 1997 as a participant in the ILC taking place at Merrowvista. As he aged from camper to adult, he continued to give back and was inspired by the AYF in innumerable ways. Michael is a current NLC co-director, as well as former mentor and Boys Camp staffer.

Michael earned a bachelor’s degree in experiential education administration and master’s degree in clinical mental health counseling at Prescott College. He helped create and implement an outpatient therapeutic program at KidsTLC in Olathe, Kansas and is inspired to work in youth development in many capacities.

After 36 years living near Kansas City, Michael now calls Stony Lake, Michigan home with his wife, Griffin, and their three daughters. He is excited to be a part of the AYF again professionally and is energized for the future of the organization.