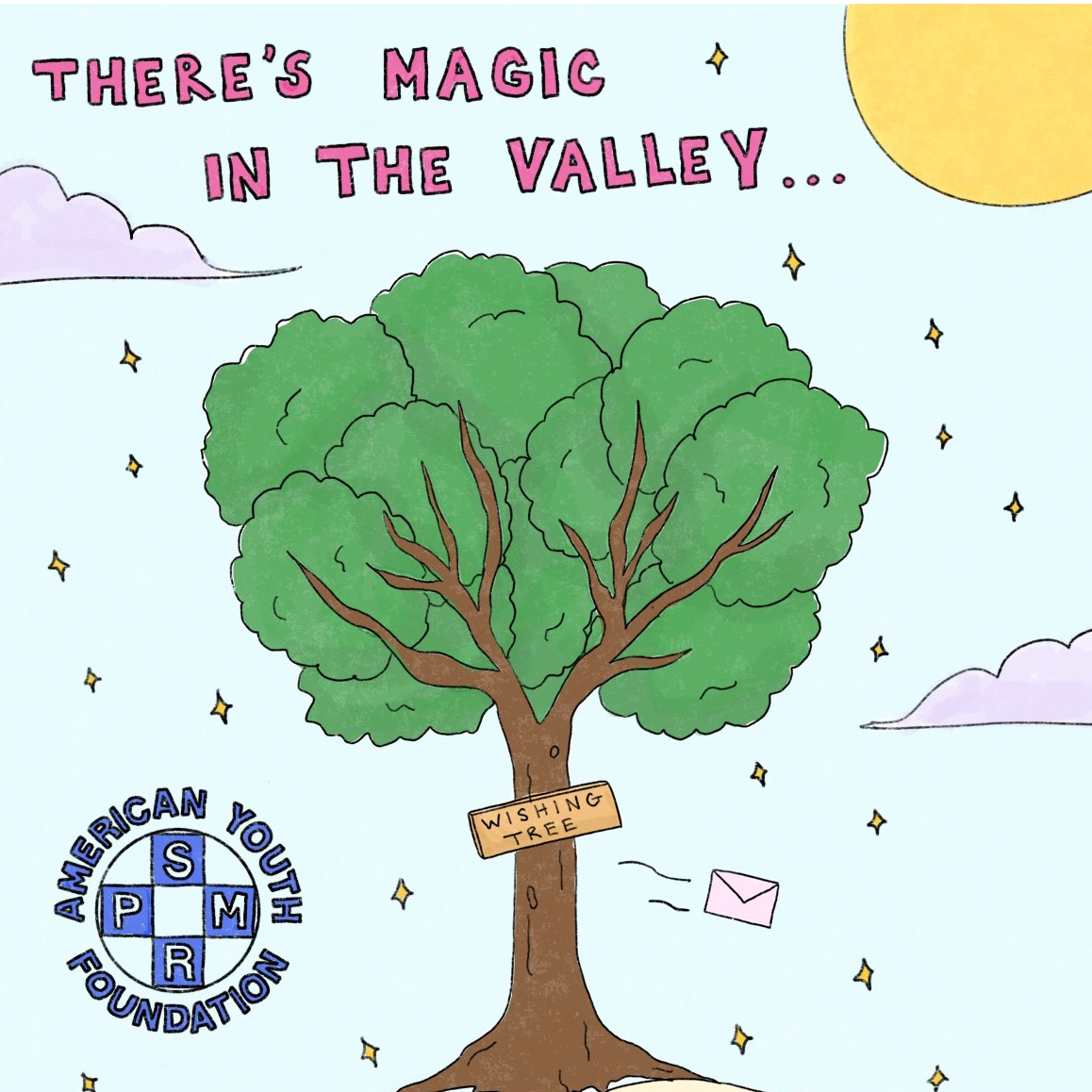 2019 Merrowvista coordinators Kal Bowers and Caroline Zerilli have written an original story about campers who embrace the spirit of the valley at home even though they can’t be at camp this summer. They’ll debut new chapters each week, so follow along on YouTube, Facebook and Instagram!

by Kal Bowers and Caroline Zerilli

Sarah sits on the front stoop of her house re-reading the letter she had spent the better part of that morning writing. The lined paper was smudged with eraser marks and the careful handwriting filled every inch of the page. Dear Wishing Tree, the first line read.

Sarah shook her head because of how silly it all was. It was a tree after all, why did she spend so long writing a letter to a tree. Her older brother had lent her an envelope and a stamp and she took her time to make sure that the stamp was stuck perfectly in the corner. In blue pen, she addressed the letter to 147 Canaan Road, Center Tuftonboro, NH, but hadn’t gone as far as to put the letter inside. If anyone was to ever actually read this, she thought to herself, they would think she was absolutely crazy. She reads aloud one more time.

My name is Sarah and I was a 3-Week Pioneer last summer at Merrowvista. I’m really sad that I can’t be a t camp this summer because I was going to be a Trailblazer for the first time. It would have been my 3rd year in a row, I can’t imagine not being there this summer.

What are all the staff going to do without the campers there? Is anyone going to be there at all? It’s so sad to think that nobody is going to be in Tri-Py. We drove past my school today and it was empty. I don’t like doing school online and I miss my friends, but I’m trying my hardest.

My mom keeps on telling me that Merrowvista is going to try to do some cool things this summer online, which is great…I just wish I could go there. I’m getting tired of staying at home all day and so is my brother.
I hope you’re doing okay and are getting some water and sunlight. I wish I could leave my house and come hang out with you for a while. I’m worried about what is happening and I really could use some camp right now.

Your friend,
Sarah from Tri-Py

She folded the letter three times, hamburger-style, and slid it into the envelope. Sarah then decided that she wasn’t going to send it, even though she could just walk to the end of the driveway and put it in the mailbox. It wasn’t going to change anything. It felt like summer was being taken away from her and a letter to a tree wasn’t going to help.

She didn’t want her brother or parents to see the letter, so she tucked it in the bushes beside the stoop. Before going back inside, she pushed the letter deeper into the dirt, to make sure that nobody would find her silly letter because after all: trees can’t write back.

The rain that night was loud and monstrous, with huge sheets of water washing the street outside Sarah’s house on Fork Avenue. The early summer bushes and flowers were thankful, but the letter buried in the dirt was not faring well. The blue ink, that Sarah had painstakingly applied hours before, had begun to run down the envelope and into the soil.

If it had been left alone all night, the letter would have been turned into an unreadable pile of mush by morning. But something peculiar happened that night on Fork Street.

As the ink crept deeper into the soil of the bush, the roots started to twist and turn slowly, pulling the letter deeper and deeper into the earth. The underground system of bushes that Sarah’s dad had planted five summers ago reached out like hundreds of tiny helping hands, straightening the corners of the page and absorbing the water that had once made it wet.

The letter traveled through the roots for the next few hours until it eventually rose from the ground on a certain stump across the path from Blueberry Cabin, delivered by the hundreds of miles of plants that knew what must be done.

The Wishing Tree had been asleep for months as they preferred not to be awake during the winters. They had tried to stay awake one winter decades ago, and the valley was beautiful. The snow hung on their fellow ancients and lazily drooped into fluffy piles on the ground. But it was too quiet in the winters, they had decided that they should conserve their energy for the warmer months.

Although it was early yet, the Tree was pleasantly surprised to feel the roots beneath nudging them awake. The letter dropped on the stoop in front of them was in pristine condition, despite a 100-mile journey. Their branches creaked and groaned as one of the limbs reached down to grab the letter. They struggled to grip the corner of the envelope as their branches were not designed for such small things.

Eventually, the Tree read slowly and intently read the letter from Sarah. Once finished, they closed their eyes. Ripping a young sapling from the ground for a pencil, The Wishing Tree wrote their response on the other side of Sarah’s letter.

It’s happening again, oh what do we do?
We haven’t seen a year like this since 1942!
Sarah, I remember you well,
The one with the bright yellow sandals,
I remember all of the campers,
Even the ones who used only candles.

I’ve seen buildings erected,
New directors elected
I’m so honored that a letter to me you’ve selected.
I share your disappointment in this Summer’s cancelation
For it’s the campers who make the magic,
not a place of staff creation.

Humans are not the only citizens of this valley
This letter you wrote, you’ve inspired a call to rally!
The magic will happen, we the Trees will see it through
Thank you for what you have started,
Something only a camper could do.

With the placement of the final period of their response, lightning flashed across the meadow. The roots swung into action pulling the letter back into the mud. The clouds above seemed to rush to get out of the way, leaving the sky wide open for lightning to strike. The rocking chairs on the Farmhouse Porch began to rock back and forth, the stacks of cups in the Eating Lodge rattled on their racks. And as if thunder could speak, the Wishing Tree bellowed:

To the Bears of the Ledge!
To the Fairies of the Bahn!
We musn’t let the spirit of camp be completely gone!

Wake up! Look alive!
Yes, I’m talking to you down there Whales!
I’ve received an important message
Thanks to the work of Root Mail!

To the Porcupines of New Jersey!
To the Rock Trolls of the AC!
It’s me your old friend, the tall and mighty Wishing Tree!

Lone Inspector, get your clipboard!
Paul and Patrick, start the Gator!
We must get started now, no time to wait for later!

With all of you awake,
I call the Summer of 2020 into session!
The campers need us, it’s from them we learn a lesson!

As the Tree roared the last word of it’s call, a magnificent purple beam of light struck the Four Fold Fountain. All four spouts burst with living thunderbolts that in no time had spread themselves out across the entire valley. They raced from corner to corner, prodding awake the inhabitants that had been sleeping for decades.

As they skittered and slid across Dan Hole Pond, The Whales breached its glassy surface, elated to escape the depths of Dan Hole. The energy danced around the rafters in the Bahn, inviting the Fairies open up the Four Fold Tournament Plaques that had served as their front doors for the last century.

The Rock Trolls of the AC shook off the moss and dirt that kept them lodged into the side of the steep hill. The Bears, happily hibernating near The Ledge, felt their fur stand on end as the electricity danced on the mountain.

The Family of Porcupines that live in Weston Shelter danced with the energy in the shadow of its luminous purple light. The (Hawks?) that occupied the bald-faced peak of Flagg Mountain screeched and cawed at the sight of the purple streaks flying up the Guerilla Trail.

Sarah couldn’t go to sleep because she kept thinking about the letter she abandoned. She thought about it in the bushes outside and didn’t feel right about it. She decided that she would sneak out when she heard her parents’ bedroom door close to retrieve it.

Slipping on her yellow crocs, Sarah crept down the stairs to the front door. Ever so carefully she slowly turned the knob, but it whined anyway. Her dog, Quinn, stared at her from her bed in the living room. Usually a barker, Quinn stayed quiet when she saw Sarah. As if she understood.

Sarah made her way to the stoop on her tiptoes and started to rifle through the bush for the letter. Fingernails covered in dirt, she dug on her hands and knees as the rain continued to pour. I guess somebody picked it up, she thought disappointedly.

Suddenly, she noticed a light purple glow coming from the hole she dug in the mulch. The corner of her letter started slowly to creep out from the soil, the roots seemingly pushing it through the earth. She tugged on the corner as the roots gently released their hold. On her hands and knees as she read the Wishing Trees response.

She looked up to the sky, to the north she saw flashes of what looked like pure purple lighting striking the earth. Sarah smiled and kept looking towards camp through the rain. I guess trees can write back after all.