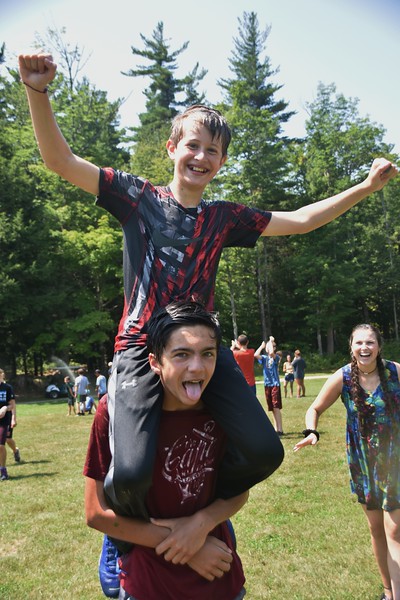 While the 2wk Pioneers were heading back from their overnight trips and the 4wk Trailblazers prepared to set out for a day of hiking or biking, the 3 weekers had a special morning here at camp. These five villages spent their morning exploring the four folds. With some extreme reflecting, sharing and playing, it was a blast of a morning and embodied the sort of balanced living that we seek here at camp.

The four folds – mental, social, religious and physical  – are often mentioned here at camp. From the moment staff gets here, we reflect upon these folds and our programs are designed to challenge campers in all four. Though many villages discuss the folds at Village Insight and some even share about them at Flag Raising, it isn’t all that often that we get to hear the campers’ thoughts about the folds in a larger community.

To kick off the morning, the campers squeezed into the shady areas in the Amphitheater to try to beat the heat while they engaged in the first activity of the morning. They wrote or drew about each of the folds – their prompt was to express how they themselves conceptualize the fold or how they connect to it. Once they were done, they put their piece of papers on the walls that corresponded with each fold. They were invited to walk around and see what others shared about the folds. They also grabbed a piece of construction paper from under the wall of the fold they felt most connected with – so those who felt strongest in their R-fold had blue, social fold had yellow, etc. These pieces of paper were used in the next part of the activity…

We have done this activity three times now – once in staff training and once in Session A – and everytime there have been so many stickies with ideas on it that have expanded the way that I think of a fold. This is true even of the ways that my conceptions of the folds have changed over the years. My own ideas of a balanced life have been workshopped in the years here at camp and the ones spent away as I learn more from how others work to grow in all folds.

After the campers shared what they had noticed on the stickies, we broke up into our Four Fold Tournament teams. This was a bit of a teaser of what is to come, as they will spend a lot of the final week of camp with this team. The Tournament’s theme has not yet been announced, but the campers now know which color they will be representing throughout the Tournament – which is pretty exciting. The teams spent time making flags that incorporated the colored pieces of paper representing the campers’ strongest fold.

After the flags were paraded throughout the AC and the teams explained their designs, they were brought to the A-field for a rowdy game of Bonkers. This game (a similar version was formerly known as Jetty Sock) has campers traveling around the A-Field in teams, searching for stations to reach safely. While they are searching for the stations, they can be “bonked” or tagged by a Bonker who will give the whole team a challenge to complete. This game offered challenges in the social, physical and mental folds – rounding out the morning pretty wholly.

Due to the hot weather, we kept the music blasting to keep spirits high and motivated and ended the game with a bit of dancing in the sprinklers. After all this four fold thinking and playing, we headed into lunch to reunite with the pioneers returning from trips. It was a four fold extravaganza!