A Sunny, Typical Day in Miniwanca 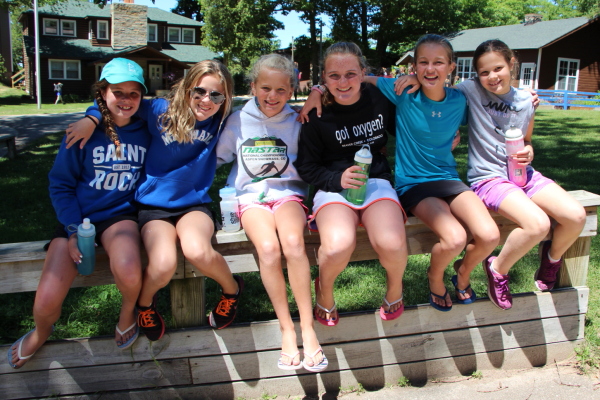 The Polar Bear Plunge woke up sleepy campers again this morning. Persistent polar bear goers are keeping up their streaks in order to get the Polar Bear Club t-shirts at the end of their session, and they aren’t giving up yet despite the chilly Michigan morning. Some stretches and morning reflection on “Best Self” from Cabin 18 turned campers from drowsy to excited. After the flag raising and reflection, everyone headed to the Eating Lounge for muffins, bagels, oatmeal and more.

In CORE this morning, the Pipers, Juniors, and Seniors built their communities with games like “Miniwanca Monster.” After their team building exercises, campers headed to their interest groups to continue working on projects, building skills, and having more fun! Shrinky Dinks were melted in Melty Things, Hike and Dip went for a hike, Yoga met on the Green Acre for a relaxing session, and Wanca Spa painted their nails. Projects in Pottery, Woodshop, and the Crafthouse are soon to be completed and are looking amazing!

The lunch bell sounded and campers sat at their tables for barbeque chicken sandwiches, potato salad, and salads. We sang, we ate, and we danced! Rest hour followed for a moment to relax before Tribal Meetings. All the tribes met to plan skits for Tribal Council on Friday night. The themes for the skits include “what if the crafthouse disappeared,” “what is Leaders in Training were directors,” “what if the green acre came to life,” and “what if campers could have coffee.” Only time will tell what creative masterpieces the tribes have concocted.

At the end of their meetings, campers dispersed to Interest Groups 3 and 4. The afternoon was full of Beach Time, Paddle Sports, High Ropes, Archery, Woodshop, Crafting, and more! After all the productivity in IGs, campers had Free Time to work on anything they wished.

Everyone collected together at dinnertime for herb chicken, green vegetables, rolls, and brown rice. And don’t forget the cheesecake dessert! The food was much needed to energixe campers through their Wild West themed Night’s Doings.

First, all campers gathered in the Eating Lodge while gold nuggests were hidden around the Hollow, and then they were released to search for gold, earn points for their tribes, and send the bandits (leaders) to jail. Next, and Wild West Showdown took place between all four tribes. Each tribe sent in a representative to compete in a challenge and earn their team the most points. Challenges included marshmallow eating, pony racing, pyramid stacking, hog calling, and more!

After exerting all the wild energy, a soft song was sung to channel focus from the physical fold to the mental and spiritual fold for evening reflection. The water of Lake Michigan was calm and so was the rest of Miniwanca. Another perfect, typical day completed.