A Perfect Beach Day and the Leader Frolic 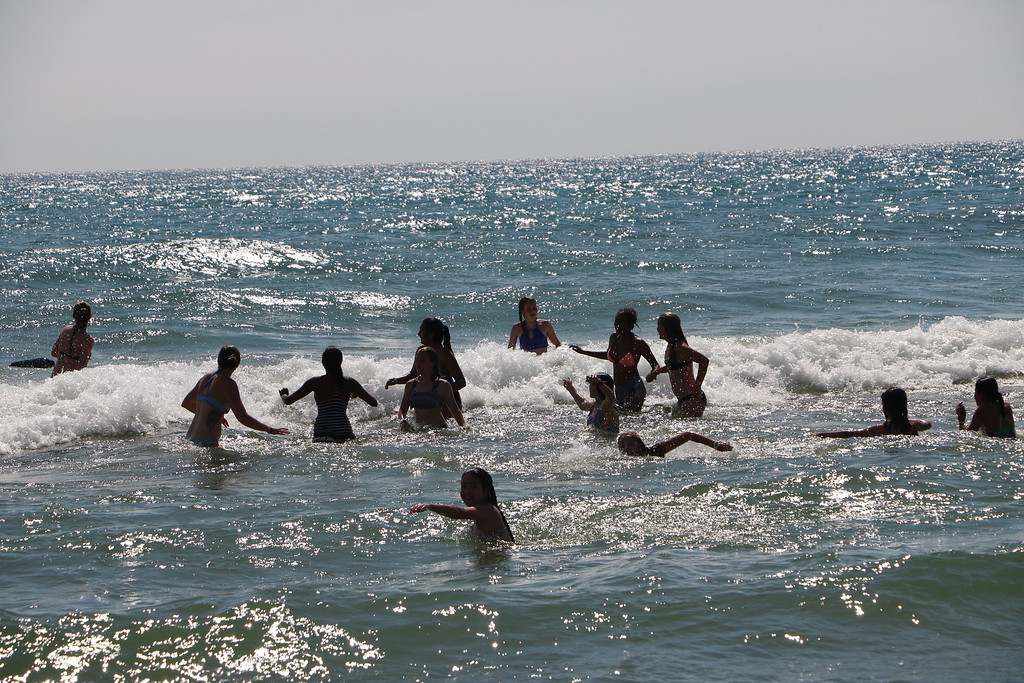 The morning dawned gloomy and rain threatened early on. This morning was supposed to be our co-ed Fun Run, named Doc Wheels after the camp doctor who was a big advocate for running. Unfortunately, the rain hit early enough that we were not able to gather together and face the mighty dunes for our twice-a-summer run. Instead, the rain offered us all a nice chance to sleep in an extra half hour and head up to the eating lodge for breakfast, where we were still able to feast on the donuts that are the traditional celebration at the end of the Fun Run.

The morning was filled with mostly typical interest groups, though our waterfront friends played some board games instead of heading off to Stony Lake. The afternoon held more Interest Groups, but the skies cleared and the sun came out in full force and suddenly it was a perfect day to head down to Lake Michigan! The boisterous waves offered plenty of fun for the campers in Lake Michigan Beach Time Interest Group and for those who headed down for Free Time. There was much sporting, jumping, and laughing in the surf this afternoon, and many a camper commented that the waves were even big enough to try surfing on!

This evening, after a delicious dinner of sweet and sour chicken, campers headed into the hollow for a short Carnival led by our Avail campers. Some campers did the candy walk, others got their faces painted or their fortunes read, and still more helped created a camp-wide craft that may be seen again tomorrow night when Avail leads Vespers. At 8:00 sharp, the LITs rang the bells and everyone headed up to the Assembly for our Leader Frolic, a play written and put on by the Leaders. This year, Liz plays a young camper from the year 1938 who is whisked to camp of the present day and must navigate the differences in time and culture while staying true to her values and reminding Miniwanca of 2017 to be their own self, at their very best, all the time.

The rain started closing in again just as the Leader Frolic finished and our Adventurer campers led us up to the Church of the Dunes for a sweet Vespers on their journey and the challenges they faced. One camper spoke of how, while biking 500 miles, it’s impossible to not have at least one song get stuck in your head. One day, out of the blue, The Climb by Miley Cyrus just wouldn’t leave her brain. She said she had never quite fully understood that song before, but on that trip, where biking to the top of one hill just led to another and another and another, she understood that it isn’t about getting to the top and seeing the view, or getting to the grocery store and eating lunch; rather, the journey is about the process it takes to get there, about facing the challenges, and going through it all one step at a time.

For all of us, we have gone through camp one step at a time, faced challenges, tried new things, and made new friends. Tomorrow is our last full day of the session, and while we are so sad to see it end, we are so very happy to have been a part of it.