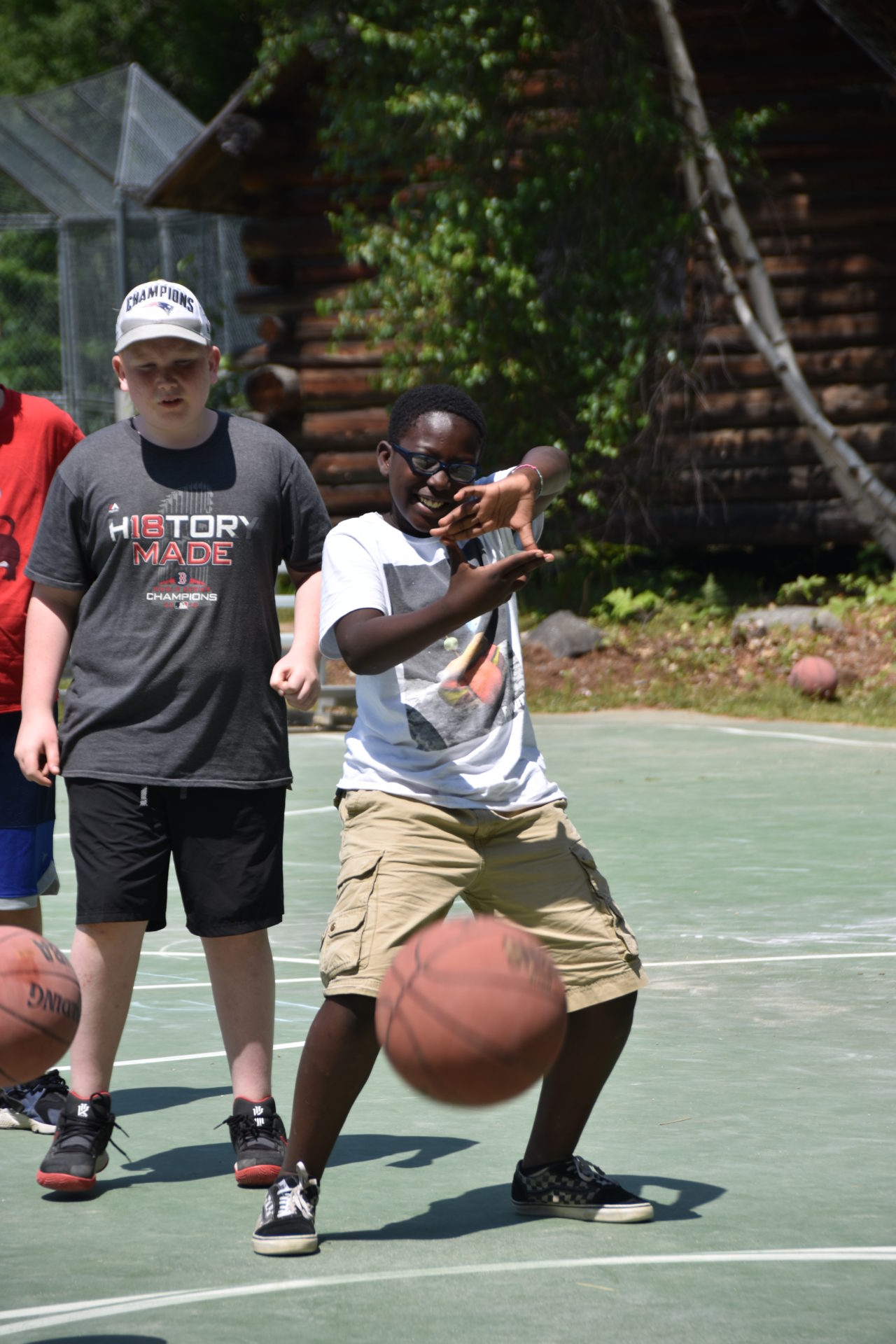 Standing outside the Bahn before Merrowvista’s annual Talent Show, I asked Kat from Tri-py what she would be doing for her act. “You can’t know yet,” she said. “It’ll be a surprise!”

The evening turned out to be full of surprises. After eating hamburgers and root beer floats at 50s Dinner, campers and staff sat down to enjoy a night of entertainment on the floor of the Bahn. I’ve had the honor of getting to know these campers over the past two weeks, and I can’t tell you how excited I was to watch them showcase their talents. The showrunners, Pioneer leaders Tessa from Tri-py and Charlie from Moosilaukee, along with Rhyolite Hans, gave the show an “ASMR” theme, rubbing objects against the microphone and announcing acts by whispering. This captivated the audience from the very beginning, causing a hush to fall over the room as they introduced the first act: Izzy, Maddie, and Jillian from Little Bigelow Cabin doing a gymnastics routine.

The three took some bold risks with their handstands, back-bends, and lifts. The performers maintained smiles and laughter throughout, bringing a lighthearted mood to their routine and earning a booming applause at its conclusion. After nearly two weeks of having interest groups, Night’s Doings, and other activities together, the Pioneers and Trailblazers were generous in giving their support to each and every act. However, the loudest cheers almost always belonged to the performers’ own villages.

A few highlights from the show include music, circus tricks, and skits. Jackson from Blueberry performed “Seven Nation Army” on his guitar, to which the crowd snapped along. Then, Hannah and Josie from Moosilaukee did a skit called “20 Questions with Stitch.” Josie was dressed in a large blue t-shirt and a matching hat, and answered all of Hannah’s questions in a perfect impression of Disney Character Stitch’s voice. To many questions like “What is your favorite movie,” or “What is your favorite color,” Josie simply answered “Stitch,” earning a laugh from the room every time.

Ian from Blueberry did some juggling for us, showing off his abilities. He juggled three balls at a time while throwing some behind his back and doing other crazy tricks. Ari of Lafayette then sang “Hallelujah” by Jeff Buckley, blowing the entire Bahn away with her heartfelt, powerful vocals. Once the song ended, the audience gave her Merrowvista’s version of a standing ovation: making an “O” with our arms above our heads and shouting “OH!”

I was particularly struck by how excited and happy these campers became when they were cheering for a fellow camper or village-mate. The feelings of pride that come with supporting a friend filled up that room.

Offering a change in pace, Logynn from Lincoln then performed a song on her “homemade junk band,” which was a contraption of metal cans and trays that she struck with a stick to play her tune. Then, the campers of Lafayette performed a parody of Miley Cyrus’s “Party In The USA,” having changed the lyrics to portray the Merrowvista experience. The word “butterflies” in a line in the chorus was changed to be “The mosquitoes fly away,” which is something that’s relatable to every camper, whether they be Pioneer or Four Trails.

Speaking of the Four Trails campers, villages Shaw, Flag, and Carter Dome used their night to rest in camp to watch “The Pirates of the Caribbean” in the Activities Center. Drew, out camping equipment specialist, said, “They wanted to just relax and watch a movie after all the trips they’ve been on.”

Back at the Talent Show, Kat, Cece, Anna, and Violet from Tri-Py closed out the show with their rendition of the song “Escape (The Piña Colada Song)” by Rupert Holmes using cups of water as props to enhance their humorous performance.

The Talent Show is a tradition that brings entertainment and pride to the community, both for campers and staff. Campers have enough confidence in themselves and in their peers to go on stage and perform, even if they seem a bit nervous. As a staff member, I am proud to support this creative, enthusiastic, and positive community in camp.