A Look Back at Best Self

This is the unabridged version of the article originally published in the 2017 Founder Fire, released in November.

Whether you’ve attended camp for one season or twenty, you have gained some idea of how four-fold growth fits into your life and the steps you might take to achieve it. In fact, guided four-fold goal-setting has always been central to the American Youth Foundation’s program. It originated in the four-fold questionnaire, which was intentionally paired with an interview – a scheduled time with a camp leader who listened to a camper’s aspirations, offered paths toward achieving them, discussed ways to work through obstacles, and, most importantly of all, gave encouragement to the camper.

“BOOSTS count,” wrote AYF associate director R.A. Waite in the weeks leading up to the first Miniwanca and Merrowvista camps. “Sympathetic encouragement has ever been a factor to success. The camp-questionnaire is a real effort to boost.”[1]

This was no quick personality assessment, nor was it a test to gauge one’s vocational interests. It was its own, singular tool for helping campers better understand their own four-fold growth. The entire operation was known as the Questionnaire Department of the American Youth Foundation. In the two-week leadership conferences known as Older Girls and Older Boys camps, each camper filled out a questionnaire, usually over the course of two or more days. 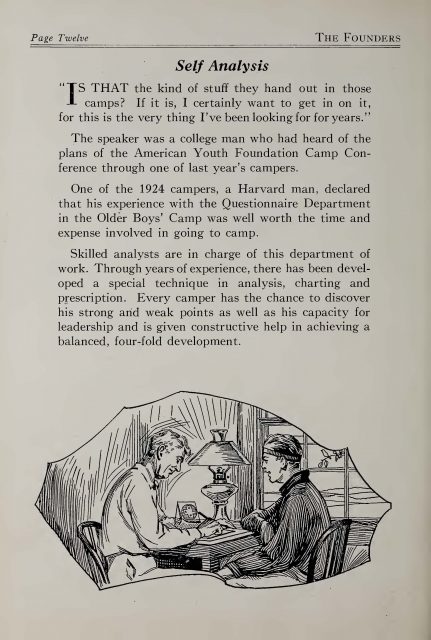 Even in the earliest days of Founder camping, the AYF was keenly aware of the flaws and failings often associated with surveys. It assessed both the individual questions and the survey procedures regularly to keep the questionnaire program relevant. “Though fully realizing that the history of personality-tests is strewn with the wrecks of many odysseys on the sea of measurement, the American Youth Foundation continues to look upon its procedure as worthy of perpetuating,” explained founding director John L. Alexander. [2] He revealed the purpose of this unusual but central component of the AYF experience: to “organize a working balance of these all-essential forces through their quickening to a fresh awareness of the heights that may be reached and the depths that may be plumbed in the attaining of the measure of the stature of full-grown manhood and womanhood.”[3] He was equally clear about the positive, deeply personal insights to be gained from questionnaire: “Never, however, is the attempt made to reduce young people to a dead level in characterful living. Not stagnancy, but stability in their forward-moving experiences is the grand objective.”[4]

After all, central to the AYF’s program was the sense of competition with the self – that urging to better oneself all the time.

The AYF’s questionnaire most likely grew out of John Alexander’s experience with YMCA vocational questionnaires and other surveys being rolled out in the early 1900s. He continued to formulate surveys along the line of four-fold development, arriving at the example shown here, which was used in one of the International Sunday School Camp-Conferences (1914 – 1923). Even before the days of Miniwanca and Merrowvista, there was a four-fold Questionnaire Department totaling the scores of earnest campers who found inspiration in these new self-assessment tools.

With the founding of the AYF in 1924, new questionnaires were developed for the 1925 camp season – and were reviewed and revised thereafter, probably on a yearly basis. At its heart, the questionnaire was meant to help campers “locate points of strength and weakness, discover unused capacity, and plan a constructive program of fourfold living.”[5] The instructions for all staff administering the questionnaire program included a five-point statement of objectives [6] found in materials dating from the late 1920s through the late 1940s. Our contemporary perspectives may quibble with the point about a societal ideal in item 3, or we may find item 5 all but impossible, yet the central themes hold true today:

Everything rested on the rounding out of the individual. The questionnaire results would say, for instance, that a skilled athlete should not pursue a “P” at the expense of the M, S, or R. The shy person was encouraged to develop the “S” – and was coached in ways to do this through an individualized “prescription” of actions to be taken in the coming year, thus contributing to each camper’s goal-setting.

Briefly put, the many steps of the questionnaire program came together in this way:

“The analysis is made on a questionnaire-interview basis. Each camper fills out a questionnaire which is later mechanically scored by a member of the staff. An interview then takes place, in which the staff interviewer discusses with the camper the ‘longs and shorts’ in the camper’s fourfold development and program, as revealed by the questionnaire, and together they discuss briefly how that program of living may be improved. Following the interview the staff member records any changes or additions in [the] questionnaire score, summarizing the combined findings of mechanical evaluation and interview. …For the areas of living which are too low to be in balance,…the interviewer prescribes activities for the balancing of the program, in accordance with the camper’s revealed needs.”[7]

Even before a camp season started, an assessment of the survey questions had been made, with multiple people refining questions, refreshing wording, and reshaping the questionnaire topics.

To better equip new campers for successful outcomes, first-year campers attended classes on the four-fold philosophy before working on the questionnaire. “Only after a week of class-instruction dealing specifically with the principles of the Fourfold life, with a full explanation of the questionnaire itself, do the first-timers fill out the blanks.”[8] No one could breeze through the exercise. All campers were expected to complete their questionnaires thoughtfully, usually in their regularly scheduled classes, over the course of a couple of days. Questions were grouped in the four basic categories of physical, mental, religious, and social.

The questions themselves were written in a particular and engaging way. According to Preston Orwig, one of the AYF’s founding directors, the approach yielded “an expressional rather than an attitude questionnaire. The material is confined primarily to the realms of knowledge and skill rather than attitude. This is not to minimize the importance of young peoples’ attitudes, nor to assert that knowledge and skill are logic-tight compartments entirely unrelated to attitude. For practice purposes and for accuracy of analysis, however, the questionnaire concerns itself with the fourfold expressional activities of young people…”[9]

Once all the campers finished, the Questionnaire Department members spent hours tabulating each camper’s results and arriving at personalized scores for mental, physical, religious, and social development. (Bear in mind that by the 1950s, the Questionnaire Department was handling upwards of 500 questionnaires each summer for the Older Girls conference alone.) At this point, the scoring was the product of each camper’s self-assessment.

But the process did not stop there. Early in the camp season, leaders specially chosen to serve as interviewers were being trained to meet with campers in a one-on-one setting. Orwig defined the AYF’s personal counseling program as one of the camp’s most distinctive features. “It should be noted here that every American Youth Foundation camper, in both Senior and Junior Camps, is scheduled for at least one personal interview during his stay in camp.”[10]

Serious attention went into the interview preparations. Each summer, camp leaders would be trained in the nuances of asking questions, listening, and gently encouraging campers to identify their strengths, work on solutions for weaknesses, and strive toward balance in the four areas. Here, for example, are some of the instructions given to the interviewers in an Older Girls training class:[11]

Emphasis was always placed on solutions. The sweating out of problems, or a focus on discouragements and complaints. was not part of the interview process. “The ‘balanced living’ basis for interviews is in sharp contrast to the counseling program of other camps in which problem cases are made the focal point of the personal interview.”[12] Of course, if a camper brought up a serious problem in the interview setting, the interviewers were instructed to refer the camper to a fellow staff member better equipped to examine and assess the camper’s personal concerns.

In this focused, one-on-one conversation, the camper and the interviewer would review the camper’s questionnaire, discuss the survey results, and in most cases, refine the scores through a detailed discussion of the camper’s daily practices, aspirations, and activities. The 1944 scoring worksheet shows three sets of numbers: the camper’s initial scores, the interviewer’s adjusted scoring, and the third, final result for each of the M, P, R, and S categories.

Ultimately, the interviewer would summarize the camper’s standing with regard to the M, P, R, and S scores to arrive at a final tally for each of the four folds. Campers earned a letter for each score that passed a specific level. The letters were then “awarded” on the AYF’s emblem, meaning that some campers wore an emblem with just a P, or just an M and S, etc.

The scoring may have motivated some while discouraging others, and over time, the granting of the individual M, P, R, and S letters fell by the wayside. By the late 1940s, campers who achieved all four letters were “entitled to wear the blue and white felt four-fold emblem, which will be sent to them from the Foundation office upon request.”[13] In other words, those who were so motivated could, upon earning all four letters, contact the AYF’s office ask for an emblem. As Preston G. Orwig described it, “There are some who have mistaken the Founder plan of interviewing for a system of measurement, which it never was intended to be. The Founder Interviewing Program is another distinctive technique of Founder Camping designed to graphically present to the individual camper the challenge of Balanced Four-fold Living, and its place in the working out of his [or her] personal life plans.”[14] ♦

Today, we refer to them as goals, but those speaking in the language of the early 1900s called them “Prescriptions.” These were the recommendations given to each camper to coach them toward the ideal of balanced, four-fold living. Here are examples taken from the standardized prescription list in the 1920s:

When we think about goals we may have set for ourselves at camp, or when we look toward future aims we hope to accomplish, we can still draw inspiration from the AYF’s earliest work with questionnaires – and possibly catch the enthusiasm for it, as voiced by this camper in 1926:

Character Analysis
Camper comrades, isn’t it great to have an X-ray taken of our characters and then be able to develop them in the four-fold way? If it weren’t for the questionnaire department at camp, which is experienced along this line of character analysis, we would all probably go through life as ordinarily as anyone, but NO FOUNDERS DO. After our interviews with the questionnaire staff we are told of our weaknesses and prescriptions are given us to fulfill during the year.

Indeed, it’s worth it. Not only are we more capable and active at camp the next year, but our whole lives, full and broad as they may be, are due to those prescriptions which encouraged us to enlarge our visions to accomplish more and greater things. [15]

“The genius of the camp-questionnaire is the picturing of the individual character through the more or less spontaneous activities growing out of choice. The answers to questions covering the physical, social, mental, and religious expressions of the spiritual life reveal the individual’s inner urges, which are so indicative of the real character.”[16]

Looking to set some goals of your own? Here are some suggestions from John L. Alexander: