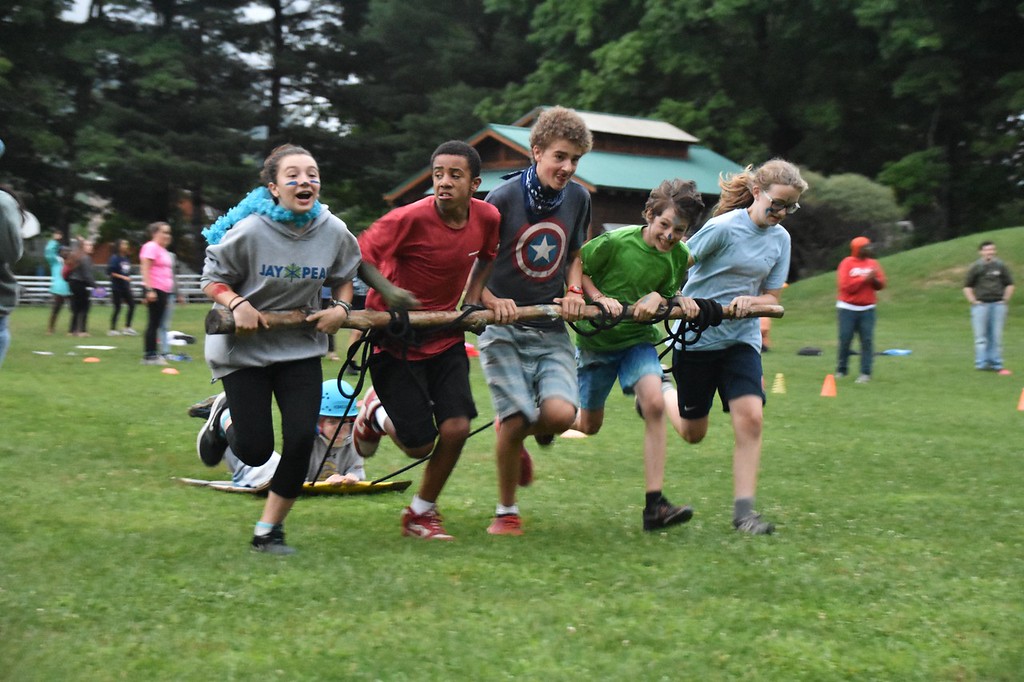 We’re coming to the final stretch! All of our in-camp programs have returned from their adventures outside of the Canaan Valley and are here to stay until the end. Our three and four-weekers have the special privilege of taking part in the Four-Fold tournament; a battle of mixed teams competing in a variety of challenges that test their mental, physical, religious, and social folds. Each year campers eagerly await the reveal of the theme for the tournament, and today was finally that day.

After having celebrated the return of all groups at Evening Festival the night before, we return to a normal schedule of interest groups, however instead of village time today, we gathered in the amphitheater, the rain having cleared but the clouds remaining. Campers sitting on the edge of their seats curious of what strange character they will call their mascot and wondering of cheers that will follow.

Suddenly “Earth” emerges from behind the doors crying for help! Earth has been drained of its resources and needs someone to help. Saturn follows out close behind and unfortunately breaks the news to poor Earth that they are not the only planet with resources and creatures on it! Earth is stunned but quick to take up Saturn’s offer to get all the other planets to help learn how restore balance to the dying planet. Earth notes that there are some people tucked away in the Canaan Valley at Camp Merrowvista that know a thing or two about a balanced life and they must be the ones to help in this grand adventure. And so then the other planets emerged each dressed in a cloth of their team’s color and an inspirational speech introducing their planet and some of the virtues that come along with that. Venus, the planet of love and representation of the social fold, spoke of our differences and team spirit brining us together. Saturn, god of the mental fold, keeps watch for all the strategy and clever thinking involved in the games to come. Neptune, the god of the religious fold, appropriately spends time reflecting and aware of our connection to something greater than our selves. And our god of the physical fold, Mercury, excited by the natural world and our connection to it as much as the growth and care we take with our own bodies. These planets accompanied by Jupiter and Pluto (a planet to us indeed) make up the six teams in this intergalactic tournament that will dominate the large activities of the days to follow.

By dinner there were banners hung, honoring the teams and their respective colors and symbols. But after dinner is when this tournament really kicked-off, with a crowd favorite Melbourne Cup! In this event each team was handed some cardboard boxes, rope, duct tape, and a log and were challenged with making a chariot in which typically the smallest camper will be towed across the A-field as fast as possible. While ideas bounced around and music played in the background the teams took to work on their contraptions. Some worked on tying the rope to the log, some brainstormed the most effective use and design of materials, and others decorated flags for their team and dressed their chariot rider in the finest of clothes and safety protection. After three rounds, Mercury and Jupiter battled for first place. It was an epic start to this tournament that ended with everyone working together to clean up, which obviously turned into a dance party. As we dive into this last crazy week of fun, we are mindful that the Gods are out there keeping an eye as we stretch and flex our four-fold balanced living, in and out of competition.