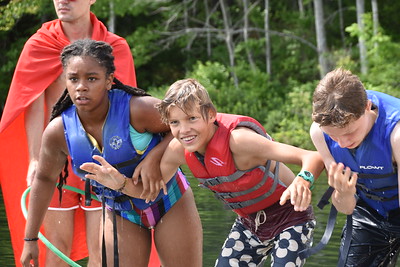 It is the third and final week of the session here at Merrowvista, which means that the Four Fold Tournament is in full swing. On Sunday, campers were told to meet at the bell in the amphitheater to discuss “finances” and make a few plans. When they arrived at the amphitheater, however, leaders and specialists were preparing a show just inside the barn doors of the Activities Center.

Campers, after a few perfunctory minutes of running numbers with Pioneer/Trailblazer Coordinator Emily, were led inside to witness the Four Fold Kickoff.

Cal, leader of Tri-Py, played Calcifer, an evil entity with a desire to take over Merrowvista and make all of the campers do nothing but make “trinkets and handicrafts” for their Etsy shop. Brian, waterfront specialist, played the Founder Fire, defender of Merrowvista and the Four Folds. Locked in a fight with Calcifer, Brian was thrown off balance when portals began to open around them. From each portal (hula-hoop with streamers attached), emerged six camp directors from six alternate universes.

Charlotte, arts and crafts specialist, is the director of Bearavista in a dimension where all of the campers are bears. Charlie, leader of 2-week Pioneer village Moosilaukee, is the Golden Witch, the director of Abracavista, a camp for young witches, wizards, and other magical beings. Eric, once the leader of Blueberry, plays the Ancient One, who comes from a camp of time travelers, and Samara, waterfront specialist, is Jeeves, the director of Altavista, a digital camp. Chris, another waterfront specialist, descended from the ceiling as the Phantom from Astrovista, a space camp where villages travel to different planets on their trips.

Campers and staff were then divided among the six teams, one or two from each village on each. Over the week, teams will compete in a series of events that will determine the winner. But at the same time, the story demands that the teams work together to find the lost Founder Medal and save Merrowvista from Calcifer.

The first event was last Night’s Doings: the Vista Grand Prix! Having learned the game from our sister camp Miniwanca, this was the first time that Merrowvista attempted this event. “It was a fun-filled competition,” said Jamie, community coordinator. “Some of the kids’ handmade boxes fell apart as they ran, but they showed perseverance and kept running. I think this is going to become a new beloved Night’s Doings as we continue to do it every year.”

Each cart consisted of three campers standing in three boxes that were connected by rope, which draped over the campers’ shoulders to keep the boxes up. Each team chose the groups of runners based on age and running ability; we wanted each group to run at roughly the same speed.

But there are more elements to this game. Rhyolite Kristina portrayed a golden star in the center, who opened up a shortcut across the track for a few lucky groups. Chaney, also a Rhyolite, was the blue turtle shell. If a cart tagged her, Chaney ran ahead to tag the group in front of them and made them run around in a circle three times.

I volunteered for every staff member’s favorite role: standing on the sidelines and throwing dodgeballs at carts of campers toward the end of the track. If they’re hit, the campers have to take a detour around the soccer goal before getting to the finish line. From our station, we watched the entire race unfold. For a game that had the potential to be chaotic, campers did an exceptional job sharing the track and playing fair. Aquavista took home first place after winning both races.

Yesterday morning was the second event in the Four Fold Tournament: the Water Carnival. Taking place at the Waterfront, the carnival’s events include water Quidditch, Greased Watermelon, Sea-Sponge Dash, Diving for Treasure, and Canoe-Sink-eroo. Each team chose campers to do each event and collect points.

And this morning was Camp Conquest, a game of capture the flag with six teams and a few fun twists. “Camp Conquest was tightly-fought,” said Jamie. “Bearavista took the first game by taking over every single territory. But the second game, Astrovista had a strong lead and dominated the field.”

The Farmhouse is in the center of the territories of the game, so I had a perfect view of Camp Conquest as it was happening. While a few campers from each team were in neutral territory right outside one of my office windows searching for the Justice Flag, epic chases and flag-steals were unfolding on the Athletic Field.