How Wonderful to Wonder 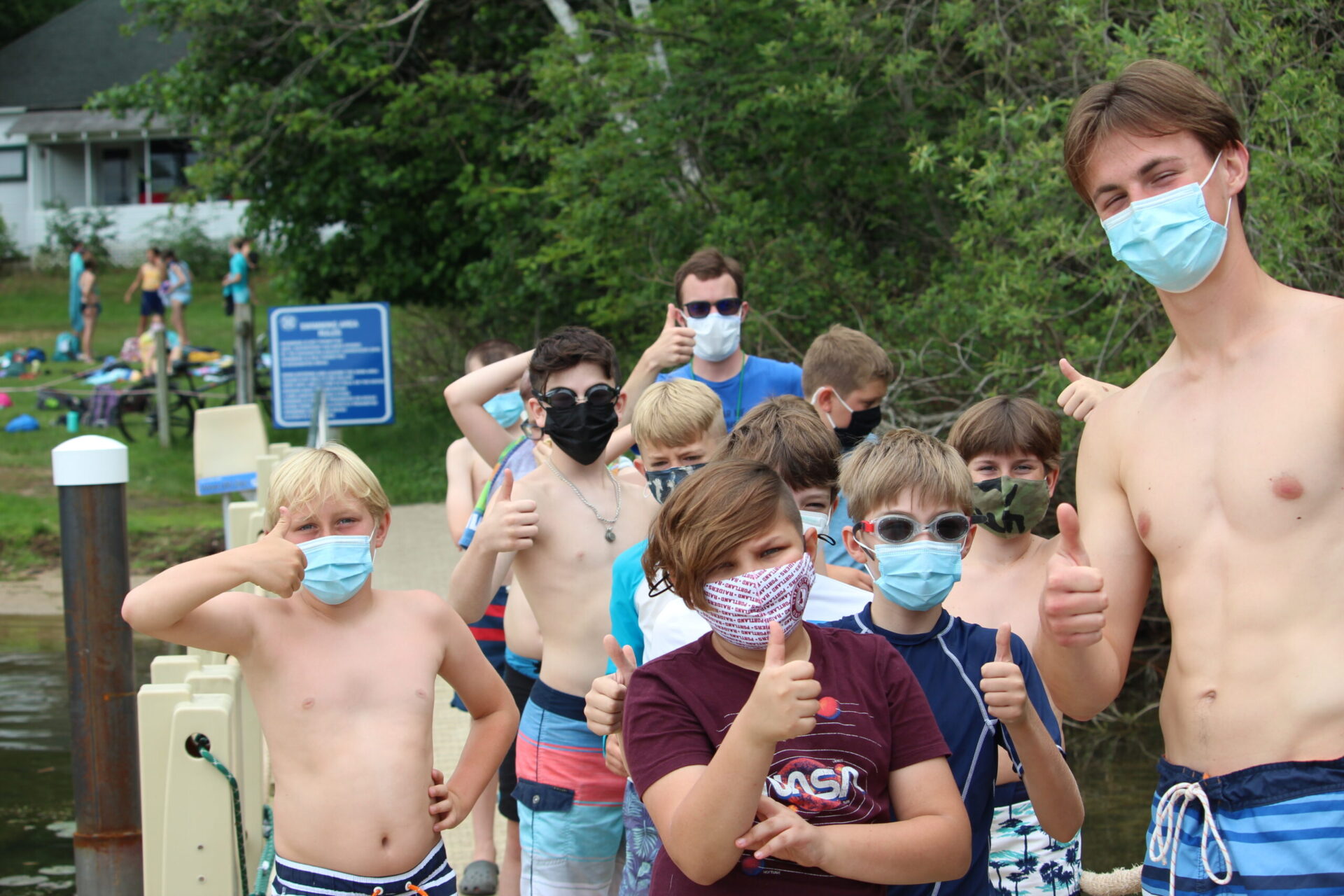 Summer 2021 has officially begun at Miniwanca! The Media Specialist will share periodic dispatches from Girls Camp and Boys Camp here on the blog. Check back often as we share more stories from camp!

As the Lake Michigan fog lifted and the soft sun appeared, campers arrived in the Hollow for Morning Stretch. It was our first morning together as a community of Darers, Seekers, Pathfinders and Way finders. Campers stood alongside their other Quad members to start the morning with a burst of energy and intention, offering Quad cheers, learning dance moves for Morning Stretches and then Morning Reflection.

Stretching our bodies and then our minds, the Pathfinders invited the community into a quiet pause to ponder the idea of wonder. By definition, wonder means “a feeling of surprise mingled with admiration, caused by something beautiful, unexpected, unfamiliar, or inexplicable.” The Pathfinders shared inspirational quotes, thoughts, and a song encouraging the community to seek wonder in their lives.

“The greatest wonder is we can see these trees and not wonder more.” – Ralph Waldo Emerson

Sitting in a pensive silence, campers pondered what they had heard before watching the flag being raised in front of the Seay Building. Honoring the silence, campers then stood and linked arms to walk into the Eating Lodge for a warm breakfast of eggs, sausage, English muffins, oatmeal and fresh fruit. 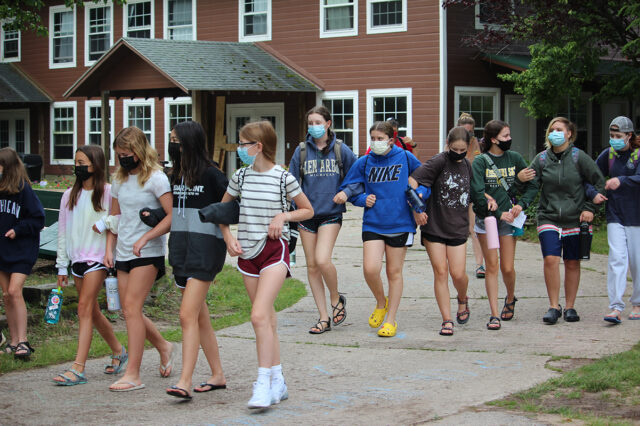 After breakfast the bell rang, signaling time to move toward the first Interest Group. Cabin groups walked down to the Green Acre for cabin photos on the beach. Cabin bonding ensued as campers decided how they wanted to take their group photo. In a pyramid or jumping? Posing and silly faces were popular choices.

Meanwhile, other cabin groups enjoyed the wooded hike to Stony Lake for their swim check at the Lilly Pad. Laughter and singing could be heard rising amongst the trees on the trail, “We’re the Miniwanca Girls…” 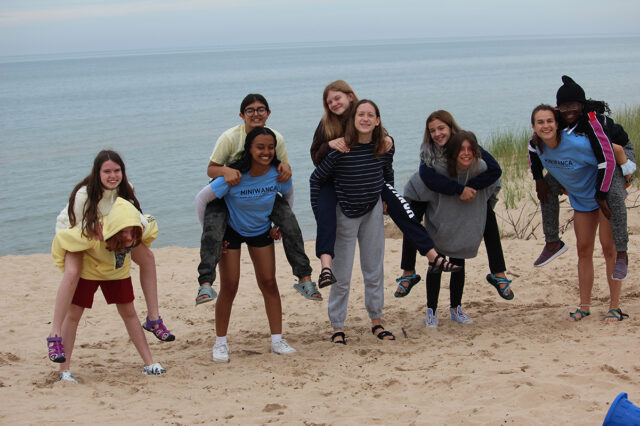 On the east side of Miniwanca, the Boys community gathered for games on Bryant Field. The shouts of friendly competition and camaraderie could be heard coming from soccer, Frisbee and the Nine Square court. Above the voices, the piano ringing out, as a camper played a classical piano song. 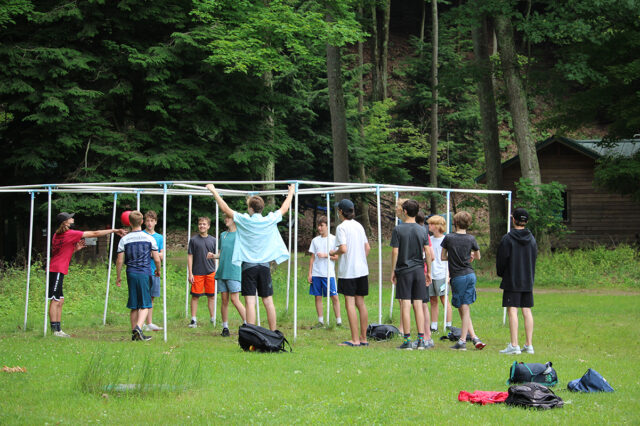 As the morning ran into lunchtime, Boyss Camp gathered at cabin group tables for a tasty lunch of hot dogs with plentiful condiments, baked beans, and a zesty vinegar cole slaw. Soon with the jubilant pounding on tables, the tradition of “Funsies” began with great applause. “Funsies” are Founder Friendly skits, jokes, and riddles, shared by cabin groups during a meal time.

Back in the Hollow on the west side of Miniwanca, the afternoon was filled with free time, dinner and then Night’s Doings. The Draws, Dunes, Ridges, and Trails raced through camp in teams, playing the Amazing Race, following the clues in an attempt to finish first and gain Quad points.

As the sun began slipping over Lake Michigan, campers moved silently to the beach for Evening Reflection. They were invited to slow down and consider again how would they find wonder this summer at Miniwanca. Would it be through the building of a new friendship, tackling a daunting challenge or by seeing something old through a new lens? LIT Coordinator ML shared Marcel Proust words: “The real voyage of discovery consists, not in seeking new landscapes, but in having new eyes.”

Soon campers trickled to their cabins and nestled in their bunks to sleep for a peaceful close to their first full day of adventure at camp. 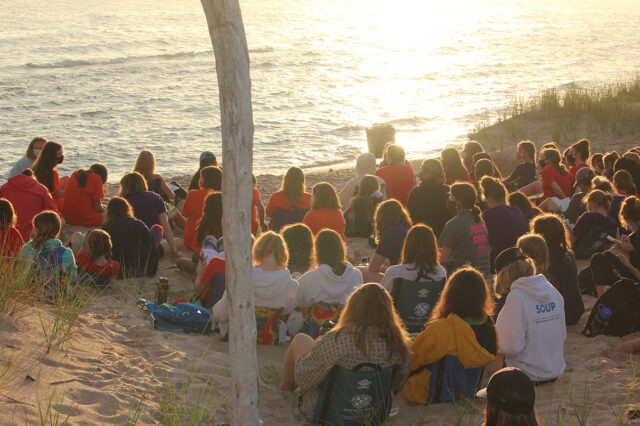