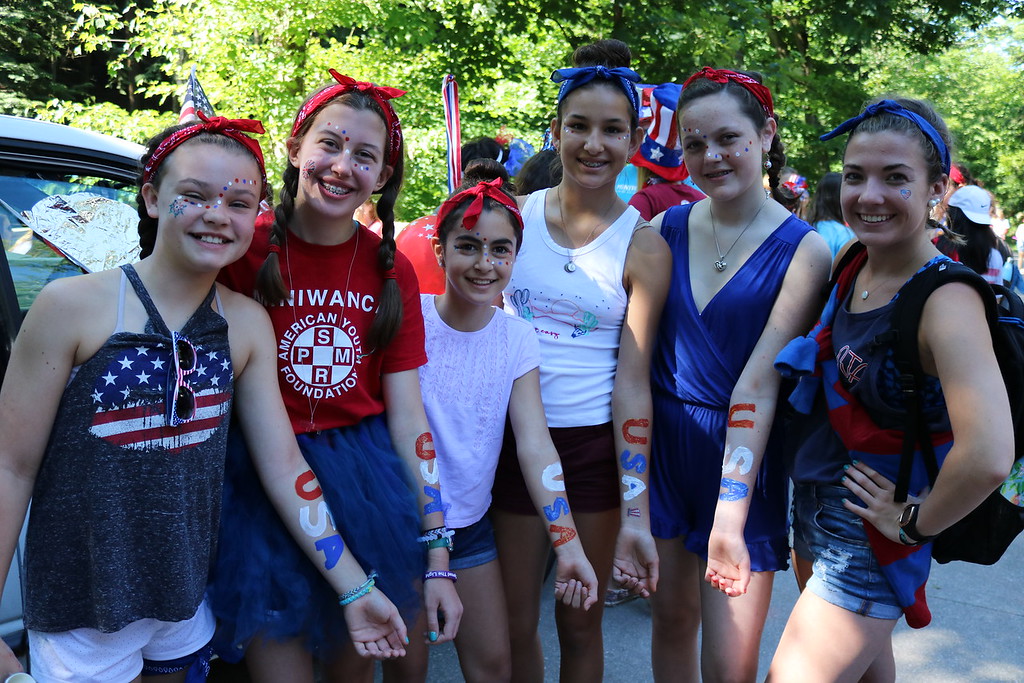 The Fourth is one of the most special days we have at Miniwanca all year long, and it was such a joy to have your campers here to celebrate with us this morning. We started off the morning bright and early with an all camp Polar Bear Plunge in our pajamas! While in the lake, which was absolutely beautiful this morning, we sang Founder Hearts and splashed around to really wake ourselves up. Breakfast this morning featured donuts frosted by our Avail campers, blueberry breakfast cake, strawberries, and whipped cream. What a decadent start to the day!

Shortly after breakfast, everyone headed up to the Assembly to start our Parade for No One. We all dressed in our finest red, white, and blue and waved to the crowds of nobody gathered around us. An epic dodgeball tournament took up the remainder of the morning. After a very competitive bracket, we came down to the final game of the Dunes versus the Trails, and the Dunes prevailed!

We had a twist on Taco Tuesday at lunch and ate enchiladas. After a normal rest hour, campers headed to a Patriotic Assembly. Tribal leaders were asked to draw in and label as many states as they could on a blank map (congrats again to the Dunes for a win in that), and campers learned fun facts about America (did you know the coastline of Alaska is larger than the coast of all the other 49 states combined?).

The afternoon brought campers a chance to reflect on their own capabilities as they rotated through three stations. In the first station, campers were introduced to the idea of a dream catcher and were asked to write their dreams for our nations and all nations on clear plastic circles to add to the giant dream catcher for all of camp. One dream said, “love is all we need,” while others called for acceptance, unity, and a world that appreciates the outdoors. The final collection of the dream catcher is a beautiful testament to the world our campers envision.

The second station brought campers down to the Green Acre, where they worked together to “embody” some of these values. Using their bodies, they spelled out the words freedom, brave, strong, unity, and peace among others. The final station was a powerful moment where campers reflected on the mission of the American Youth Foundation:

The American Youth Foundation inspires people to discover and develop their personal best, to seek balance in mental, physical, social, and spiritual living, and to make a positive difference in their communities and the wider world.

The campers focused especially on that last part, seeking to make a positive difference in their communities and the wider world. Campers talked about what is going on in their communities, both the good and the bad, and what they saw people doing to change things. They were also asked to think about what they can do to make a difference when they go home. The campers wrote their thoughts on note cards and stapled them to a piece of muslin on which we had screen printed the Founder Fire. We hope this beautiful piece will come home with them and continue to serve as a reminder of their enkindled spirit and of the amazing things they hope to accomplish.

We ended our night by watching Moana, and it truly made for a complete Fourth of July. The day was wonderfully celebratory, full of energy and laughter, and may be the best Fourth of July celebration Miniwanca has seen in many years.