“Faces around us were lighting up…” A Summer at Miniwanca 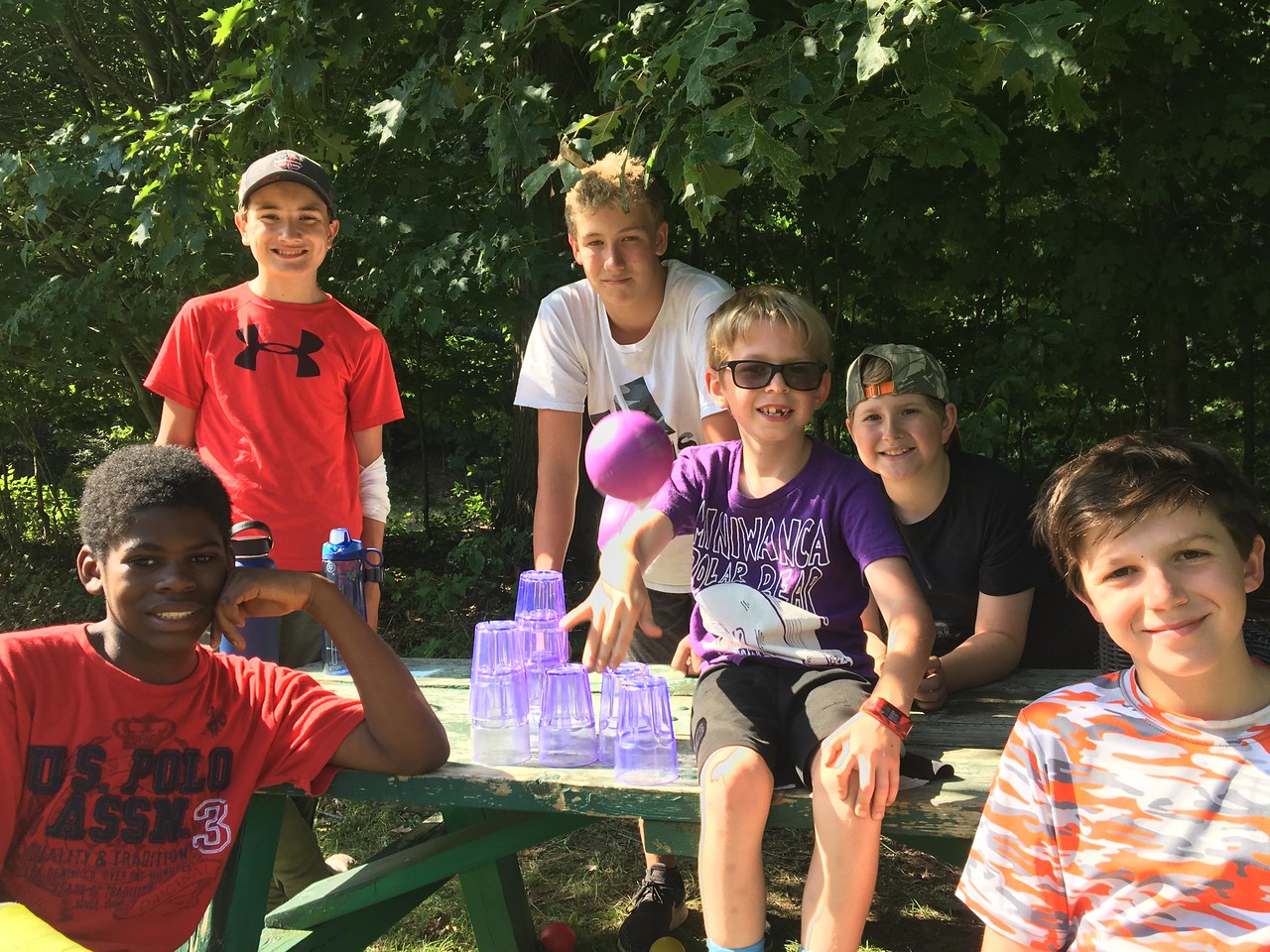 Below, Ollie Williamson, a former and current Boys Camp staff member shares his experience of his first summer on staff at Miniwanca. We hope you enjoy and if you’re interested in working at camp this summer, we hope you’ll consider applying!

Before I arrived at Gerald R. Ford Airport in Grand Rapids, I had no idea what my summer was going to entail. When I touched down, I found myself with a couple of other international staff and a few U.S. residents from further around. With all our stuff ready to head into camp, we bundled into a bus, stopped for a Wendy’s, and slowly began to talk about our varying cultures. I was nervous as this was not only the first time I had ever travelled outside of the U.K. by myself, it was also the first time I had ever been to camp. 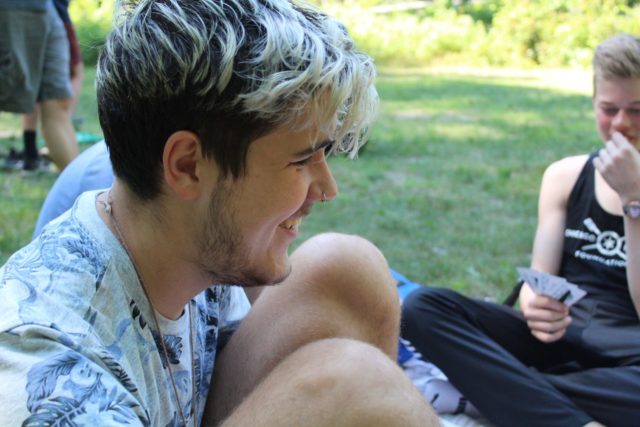 When we drove through into the car park and got out of the van, it was dark and we couldn’t really see where we were going to be spending our next two months together. It was then when I met the beaming smile of Tiwi, the Boys Camp Director, who knew all of our names and welcomed us with open arms . He’d obviously made the effort to do this so we’d feel as at home as  possible, even though we were over a thousand miles away. I felt honoured (yes, that’s how we spell it across the pond!) that my boss seemed genuinely excited to have me on board. For the rest of the evening we hiked through the woods and I nearly passed out climbing the sand dunes. At that point, I’d been up for 24 hours and I was definitely not at the peak of physical health.

After getting a good night’s sleep, the beauty of camp really began. I woke up the next morning to actually see my surroundings in daylight and it was beautiful. There was so much greenery and I was so excited to explore it. We entered the eating lodge and discovered the buzzing energy at camp, which made a few of the other Brits and me feel quite outside of our comfort zones. Nowhere in the U.K. would you find people dancing around the dinner table like it was a slumber party, and showing so much passion about washing dishes, sweeping the floor and shoveling compost for the garden. It was surreal, but it was awesome.  The community was one that loved doing even the more gritty tasks, and it brought so much life to everything that it touched. I wanted to be able to do the same thing and only a place like Miniwanca could allow me to do it. 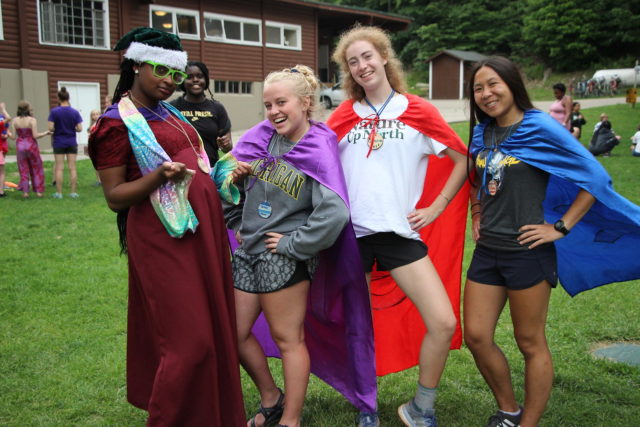 After staff training, I got my first set of campers. I was in charge of six younger humans for the course of two weeks. I felt nervous, but in a matter of hours, they were my friends. We were singing in assembly, working out the most bizarre skits and all laughing our heads off. I spoke as if I was younger again and sometimes they spoke with wisdom beyond my age. The dynamic shifted every single day, which allowed us to become closer. We could joke around like a bunch of kids, and then switch to speaking about more serious topics about the world and our lives. It was as if we were octogenarians at our 70th high school reunion. I taught them lessons from my experiences as a young adult living in the U.K. and they taught me things from their experiences as teenagers living in the US. Camp gave us the opportunity to learn about each other and grow from these lessons. In my seven years of teaching experience, I’d never experienced anything like it.

In the past, I had struggled a lot with my mental attitude. There were times when I wasn’t the brightest I could be. At camp, I learned that it is okay to not always be your brightest as long as you are working towards something. For a few weeks, I had been bringing a lot of energy to the activities that my campers were involved in, but I made it a goal to push myself even more. Going into the last few weeks of camp, I decided to bring as much positive energy as I could.

If you had been there for the Four Fold Tournament during Session B, you would have seen me dancing like a dad on Christmas day. I was chanting for our Quad (shout out to Creeks and Dunes), rallying up all of the kids, and yelling with them at the top of our lungs. We wanted to bring as much PMA (Positive Mental Attitude) as we could. Faces around us were lighting up at the sheer silliness and happiness we were exuding into the big circle of people on Bryant Field. That was the moment when I brought the most energy to camp, and it was glorious. I felt like I’d accomplished what I set out to do when I first arrived. 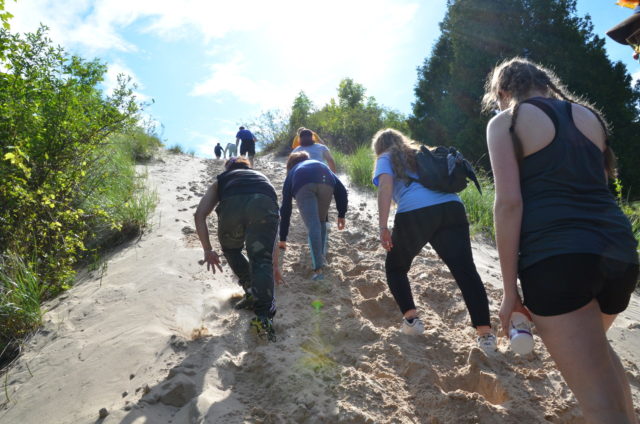 Looking back to the beginning of staff training, I remember learning about “Miniwanca Magic.” Miniwanca has a certain air about it that makes the world seem like a brighter and more amazing place. At first I was skeptical of this concept, but now I know it to be true. The feeling of Miniwanca Magic has been with me since I left, and it has allowed me to do things that I didn’t think I would do. I have completed two weeks of work on a Netflix series in Spain, working with the Assistant Director Department on set. I have applied and been allocated a place to study in Galway, Ireland for a year. Finally, I have been working with a summer camp agency to help send people like me out to other camps in the U.S.A., hoping that they can experience the same joy that I did. I have changed for the better, and it’s all thanks to Miniwanca.

To think I have to wait four months until I get to receive my next dose of Miniwanca magic is almost agonising, but I’ll wait. Until then, I will keep on striving to be my best self and dare myself to try new things every day. Miniwanca changed me and now I never want to spend my summer anywhere else. 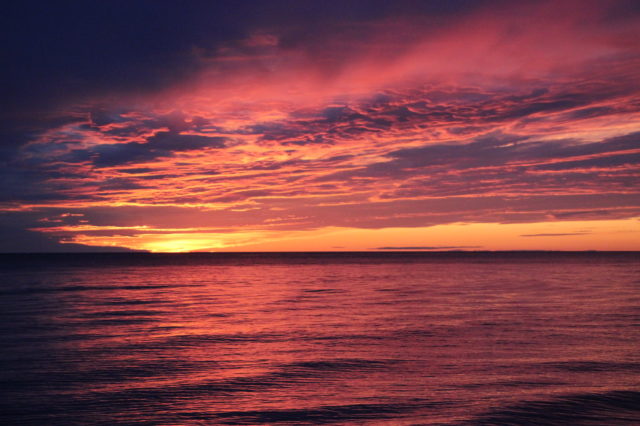