It has been quite an exciting few days here in the Canaan Valley! From the minute campers joined their villages, their time has been filled with games to help them get to know the other members of their villages and to ramp up the fun of this whirlwind week at camp. After a fun filled first evening, the entire in-camp community gathered on our Athletic field for an opening carnival where we played games like high five jousting and giant skip-it. From there we sent them off to their cabins for their first village insight (VI)- a chance at the end of the day to reflect on the day and share with the group- and an early night after an exciting day. 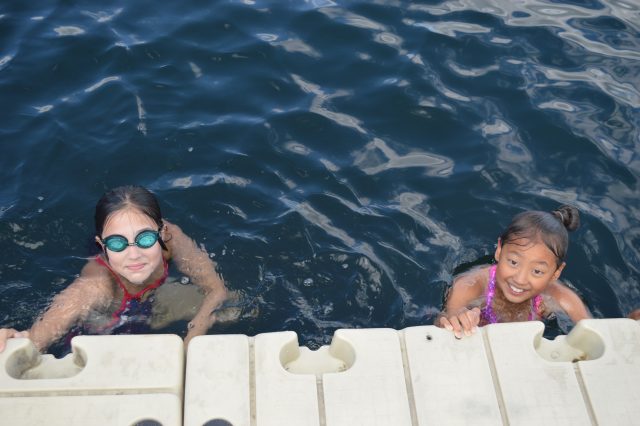 campers. They shared with the community what keeps them going as they conquer incredible challenges like the 22 days of biking around Nova Scotia that lies ahead of them. After breakfast, the Discoverers and Trailblazers headed out for more time with their villages as well as health center check ins and swim assessments on Dan Hole Pond. The first morning is our chance to help campers get acquainted with Merrowvista, meet the health team, and create strong support networks for each camper here at Merrowvista. During swim assessments, our waterfront staff get a chance to see where each camper is and help place them into the appropriate swim lesson. It was also a great chance to get a swim on a beautiful day!

After lunch, the in-camp program got off to a powerful start at orientation with the coordinators in the Bahn (complete with songs, games, and a silly skit) and the beginning of interest groups! Campers got to spend the afternoon making miniature food out of sculpy clay, sailing around the lake, and flexing their improvisation skills among other things. The pottery shed got some much needed company, and the basketball court was abuzz with friendly competition. Ready to refuel, we all had a delicious dinner and got ourselves ready for Opening Council. Council is one of the oldest traditions at Merrowvista and is a chance for the whole community to come together to share their voices in song. What was already a beautiful council became even more impressive when the community refused to let a little rain keep them from enjoying each other’s company and having a great time.

Tuesday was a bittersweet day because the excitement of the first normally scheduled day of camp battled the sadness of saying goodbye to many of our Four Trails campers as they headed out on great adventures. While they were packing their backpacks and paniers, the rest of us were expanding our horizons in a different way by starting a new adventure with two more interest group activities. Climbing in the Activity Center and Ultimate Frisbee on the A-field got people moving, while Paper Making and Arguing for Fun helped us flex our minds and imaginations. Tuesday also meant the first Village Fun Time either doing Arts & Crafts, swimming at the waterfront, or going on an ambitious hike to the Ledge right here at camp. The groups that hiked – Mahoosuc, Lincoln, and Whitecap – packed up bagged lunches and took on the challenging hike ahead of them to be rewarded with an amazing view on Dan Hole Pond and the mountains beyond us.

The day ended with Gold Rush- a Night’s Doings activity in which the campers are recruited to help recover gold that has been dispersed throughout the meadow while running away to escape the ban
dits who are chasing after them to try and steal their gold. It was a great time for all, even the bandits, and allowed everyone to get their last bursts of energy out before the day was over. After the excitement had subsided, campers headed back to their villages with their leaders for another VI and a good night’s rest to rejuvenate them for the wonderful day ahead.